Wahala is co-founded and co-directed by Neelu Bhuman and Campbell X. Kayza Rose is the Operations Director and Kim Tatum aka Mzz Kimberley is a member of our curatorial team.  We strive to create more films that represent QTIPOC people behind and in front of the camera. 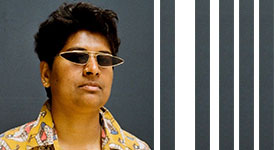 Neelu is an independent filmmaker exploring social and political themes as they play out in close relations. Playfully evoking insights into the workings of difference in intimacy, her films blend viewpoints ranging from race, gender, sexuality, culture, class and romance. Pushing these themes in FU377 (2014) and More Love. Less Prepackaged Bullshit (2017), Neelu’s films purposefully move towards abstract retellings of the problematics of identity categories and foregrounding varieties of resilience and resistance to experiences of duress – both immediate and political. FU377 (2014) has won best animation awards in New Delhi, New York City and Kolkata film festivals, while Love Letter/Prema Lekha (2016) garnered the best short in Graphic Arts category at the Tunis Chouftouhonna Feminist Festival. His films have screened at over 70 festivals world-wide including top-tier LGBTQ+ film festivals such as Frameline, Outfest, BFI Flare, Khashish and more. Two of their films, FU377 (2014) and More Love. Less Prepackaged Bullshit (2017) are being distributed by the Canadian film distribution company CFMDC. They are currently in post-production of TRANSFINITE, an omnibus feature film, set in the San Francisco Bay Area featuring seven stories by and about trans and gender non-conforming people of colour. Campbell is an award-winning filmmaker who wrote and directed the queer urban romcom feature film Stud Life (2012) which was awarded the Screen Nations Independent Spirit Award (2013) and the Best Black LGBT film in the Hotter Than July Film Festival (2013) Campbell was on the jury for Short films for Outfest LGBT film Festival in Los Angeles, the jury for Lili Award in MIX Copenhagen, for short films in Oslo Fusion, and the International Jury for the Iris Film Festival in Cardiff.  Campbell directed DES!RE, a jazz meditation on exploring desire for transgender masculinity and female masculinity. Campbell is one of the directors of Spectrum London (2017) a drama web series drama written by Jake Graf exploring the lives of queer people in London – which includes a multiethnic and multigendered cast, and Different for Girls (2018) an adaptation of the LGBTQ+ bonkbuster novel Different for Girls written by Jacquie Lawrence set in Chiswick West London and produced by Fizz Milton. Campbell directed VISIBLE (2018) documentary, produced by Kayza Rose,  which explores the challenges of accessing  UK QPOC history as well as the pleasures of seeing our QTIPOC queer ancestors in the diaspora.  Campbell is a co-creator with Kayza Rose of QTIPOC Family an intergenerational event with DJs, film, performance and community participation. 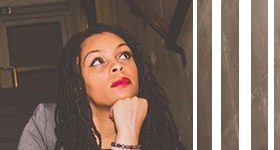 Kayza Rose is the Operations Director at Mzz Kimberley’s LIFE which she developed with Mzz Kimberley to support CliniQ – centring trans people. Kayza is a creative producer, artistic director, activist filmmaker & Arts Council England – Change Maker who uses creative practices to give marginalised groups a voice and combines her work at Mzz Kimberley’s LIFE with her roles as Chief Operating Officer at AZ Mag & Wahala Film Fund, Artistic Director at AZ Hub, guest lecturer & curriculum consultant at Royal Central School of Speech and Drama and as creator & Artistic Director at Family Dinner which is a sober ,day event focussing on QTIPOC mental health. Kayza is a co-creator with Campbell X of QTIPOC Family ,an intergenerational event centring LGBTQI+ BAME people with DJs, film, performance and community participation. In 2018 Kayza produced VISIBLE ( directed by Campbell X) which is about the erasure and sanitisation of QTIPOC history and contributions. Kayza is Head of External Events at UK Black Pride which covers events outside of the annual celebrations in Haggerston Park. Kayza is Producer at QTIPOC Creatives in partnership with Duckie which was created as part of her change maker as a pilot & developed in 2017 for young, working class LGBTQI+ BAME creatives who don’t have any formal arts training. After the success of the first cohort of creatives, the next QTIPOC Creatives arts school will be opening in 2020. 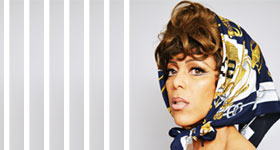 Mzz Kimberley is a film/TV and theatre actress. She is a jazz & torch singer. She has sashayed for television’s Project Catwalk, presented by Kelly Osbourne. Mzz Kimberley is featured in the national TV ad campaign for Tennent’s Super Ice, Renault Cars, Dove Soap and BBC worldwide documentaries. Mzz Kimberley’s first film role was the cult hit ‘Killer Tongue’ with award-winning visionary director Alberto Sciamma. Additionally, she appeared in ‘Preaching to the Perverted’, a role first offered to Jerry Hall. Other acting credits include, ‘Wave Lengths’, ‘Cold Feet’, and a cameo role in ‘East-Enders’ with scenes opposite the Mitchell brothers. Mzz Kimberley is a main character in ‘Spectrum London’ directed by Campbell X. Mzz Kimberley is a regular on the main stage for London Gay Pride and head judge for Pride’s Got Talent. In 2018 Mzz Kimberley became the patron of CliniQ, health service for the transgender community.